Simon passed away this past Sunday, January 20th, 2013.  He was 60.  Still so young.  I count Simon as a good friend.  We shared many experiences from the active reaches of the New York artworld, where it seems there's always a good party after the one you've already found.  And Simon would always know where it was.

He had great sense of fun, and for example I asked to hang out for the day in Chelsea and take some shows in together.  He said I've got a great idea, you meet me for lunch.  I thought he had some secret dive he wanted to show.  As it turned out he had me meet him at a Rirkrit Tiravanija show where as per the artist's performances, he serves soup to anyone that cares to show up.  What a sense of humor, and daft finder of the free, that's Simon! The show presented 'Untitled 1992 (Free) (re-created 2007)' by Tiravanija at David Zwirner Gallery in 2007.

And there's always that show you and I did together.  It was my first big show, and you made that happen for me, so of course, there's a word of thanks for that.  And I remember how you told me, I saw Simon as I usually did, out at the big opening nights of artshows and he said to me come for a ride.  He had his friend with him, Bernd Nabe  who is known as much for his own personality as the junker convertable that he rides around town.  It was January and the night was unusually balmy as explains the convertable.  We were headed downtown, to another art party and on the West Side Highway is how Simon delivers the news to me of his show that he's putting together with me in it to open in 2 months time.  He had a swell sense of timing.  But what's more, we had some excellent walks and chats and visits and all that.  Some quite bleary-eyed, and us the better for it. 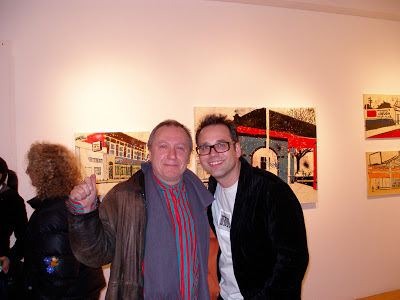